Experimental activity, carried out in the framework of both ASI led HERMES-Technological Pathfinder and H2020 HERMES-Scientific Pathfinder projects, is proceeding quickly with the integration and testing of the Payload Front-End breadboard. The board includes two key elements of the detector system, the X-ray detectors (Silicon Drift Detectors, SDDs, designed by INFN-Trieste and Università di Udine and produced by Fondazione Bruno Kessler) and the ASIC Front End Electronics (designed by Politecnico di Milano and University of Pavia).

The board, designed by INAF/IASF-Milano, has a “reduced” electrical configuration (only a single quadrant of the full HERMES payload is fully functional), but it is completely representative of the flight version from the point of view of the layout, components and routing of the electrical connections.

This preliminary activity was required to consolidate the integration procedure and its workflow (involving FBK) as well as to perform functional, electrical and performance tests.

Innovative architectural and engineering choices, e.g. single-channel ASICs connected to a multichannel ASIC, current line drivers, rigid-flex PCB, were adopted to satisfy very stringent space constraints. This required some further verification to demonstrate the functionality of the proposed design, and in particular the absence of electrical cross-talk between channel output lines, which can degrade the expected performance.

A test campaign has been carried out on the week of September 16th, 2019, at INAF/OAS-Bologna laboratories, by the main actors involved in the detector system development (Dr. F. Fuschino and Dr. R. Campana from INAF, Dr. M. Gandola from PoliMi, and G. Dilillo from UniUd).
Special care has been taken to verify the electrical cross-talk between channels using a dedicated test equipment. The detector board was then irradiated with a 241-Americium X-ray source, and X-ray events detected by the 20 independent SDD channels mounted on the board were registered. “The in-depth data analysis demonstrated that the system is not affected by significant electrical cross-talk” – reports Dr. Fabio Fuschino, responsible of WP4 of the HERMES-SP project.
“The next step, after this very successful result, is to verify the performances in terms of spectroscopic capabilities and electronic noise” – adds Dr. Yuri Evangelista, responsible of HERMES-SP WP3. These successful tests validate the design, realisation and integration procedures of the board and its key components, opening the way to the final design, production and integration of the board proto-flight module. 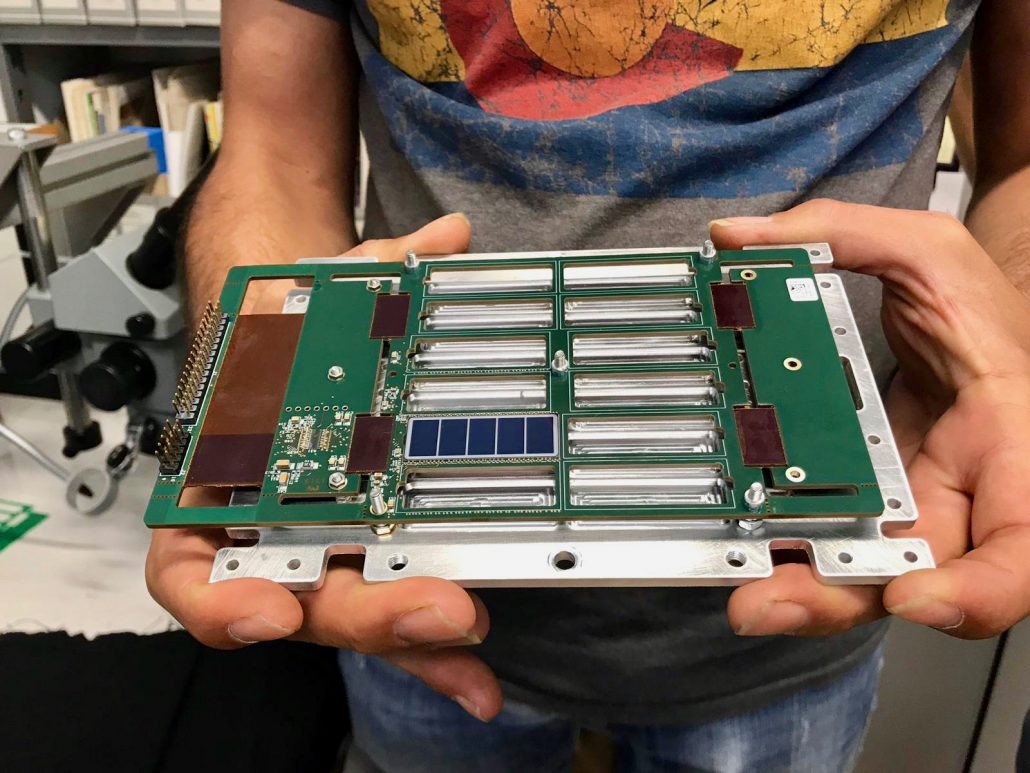