The activities of integration and test of the hermes payload resumed at FBK labs starting from the beginning of June 2020 with the preparation of the jigs needed for the integration, and the finalization of the procedure for the SDD reinforcement.

Before the integration of the scintillator crystals with the FEE-PCB, each crystal shall be individually wrapped with reflecting paper, and then assembled in 12 groups of 5 crystals each.
Insert one by one the 12 crystals groups into the rectangular slots.
Figures show the crystal box populated with 60 wrapped GAGG crystals.

SDD are fragile and before integration needs to be reinforced. The solution chosen after many mechanical and thermal tests performed in the months of February, May and June 2020 is to use ABS+Kovar frames.
Both FEM+thermal analyses and tests in thermal chamber validated this solution.

Glueing of ASIC OnFEE board

Electrical test of all 120 LYRA-FE and 4 LYRA-BE effectuated (Aug. 10-13) before starting the operation of bonding of the SDD, which lasted until Aug 24-25).

For each of the twelve  2×5 SDD mosaic the following bondings are needed:

10 anod bondings (at the center of the SDD in the following figure) and 10 “return” bondings (the square left to the center in the figure), one for each SDD. 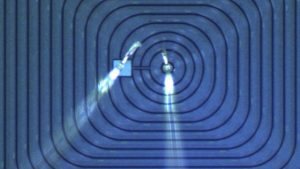 After validation tests of the system after SDD bonding, the FBK and INAF teams proceeded to the integration of the FEE PCB with the crystal box.

The next figure shows the crystal box with silicone pads inserted. The silocone pads have the function to assure the optical coupling between the crystals and the SDDs.

The FEE-PCB has been then integrated with its support structure and with the crystal box.

A first test of the integrated system has been executed at FBK labs with a Cesium radiactive source. The detector system is then connected with ground system equipment for a first test acquisition.

The detector system has been then packed and transferred to INAF-IAPS laboratories in Roma, for functional tests and characterization (Aug. 28). The following figure shows the system in the climatic chamber at IAPS Roma ready for tests (Aug. 31st – Sept 11).